* In case of any delay in receiving the OTP, you may verify it later. Please proceed without verification.

Enter your City name or Pincode

Chatra city serves as administrative headquarters of Chatra district and is located around 123 km from the state capital Ranchi towards the south direction. The city maintains a special historical significance for the country as Raja Ram Mohan Roy, the prominent social reformer, worked as a ‘Sirishtedar’ at Chatra city during the year of 1805-06. In addition to this, the ‘Battle of Chatra’ during the Mutiny of 1857 between the insurgents and the British also make this place a key chapter into the history of India. 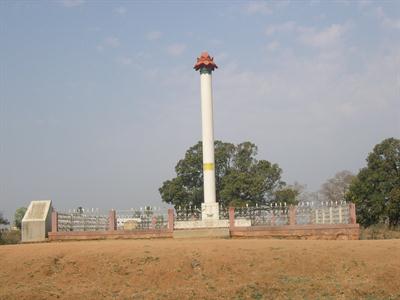 Memorial at Phansi Talab in Chatra
Chatra city is surrounded by various blocks in its varied directions such as Lawalong block and Simaria block towards the south direction while Giddhor block and Pathalgada block towards the east direction. Apart from that, there are 320 villages and 27 Panchayats in Chatra city. According to the 2001 Census of India, the total population of Chatra headquarters is 169741 in which there are 87767 males and 81974 are females. Of the total population, 42,020 people live in town and 127,721 are settled in villages.

The city of Chatra is located at the latitude of 24° 12' 16.24' N and the longitude of 84° 52' 37.34' E. It is in the elevation of 515 meters above the sea level. The people of this place have to face a very hot summer every year as the temperature goes up to 43°C during this season. On its contrary, the winter season provides much relief to them with the temperature generally remains in between 12°C to 14°C during December and January. Besides that, the major rainfall comes at the city in the months of July and August. So, as a traveler, you can arrive at this naturally blessed place in October and November months.

The administration in Chatra comes under the Sub Divisional Officer (Civil). In fact, he is a miniature Deputy Commissioner who holds the responsibilities to supervise all the matters related to magisterial, revenue, executive and development. The officer also co-ordinates with all the officials related to Public Health, Animal Husbandry, Agriculture and Revenue departments in the subdivision. He also acts as a mediator between the Deputy Commissioner and the Circle Officers along with maintaining closer contact with the public to look on to their grievances. Maintaining law and order in the city is also his duty particularly during the legislative elections in the state and general elections in the country.

The city of Chatra is located at the crossing of National Highway (NH) 99 and NH 100. These national highways are well connected to the major cities of Jharkhand state such as Ranchi, Koderma and Gaya of Bihar. However, Chatra does not have its own railway station and thus for reaching at this city, one can approach Gaya Railway Station (75 km) or Koderma Railway Station (91.8 km) or Ranchi Railway Station (140 km). Further, the nearest airport to Chatra is Gaya International Airport in Bihar which is placed at the distance of 73.9 km to the city. Therefore, by road is perhaps the best option to reach at this splendid place.

The people of Chatra enjoy every opportunity to celebrate various kinds of festivals, which are varied among the different communities here. The Hindu people in the city generally celebrate festivals like Ramnavami, Deshhera, Diwali, Holi, Chath and Basant Panchami. On the other hand, the tribal inhabitants also celebrate their festivals such as Jani Shikar, Sarhul, Manda and Karma. As Chatra also has some Muslim population, so the festivals of Muslim communities are also celebrated for instance Muharram, Id-Ul-Fitr and Shabe-barat. Besides the festivals, various kinds of fairs are also conducted every year in the city of Chatra. These are: Chatra Mela (organized as a cattle fair during Durga Puja, Kundri Mela in Chatra (organized in Kartik Purnima), Kolhaiya Mela in Chatra (organized on Magh Basant Panchami) and Sangharo Mela in Chatra (organized in Sawan Purnima). People participate in these fairs with great enthusiasm and merriment.

The historical city of Chatra fulfills all the medical requirements of its people. It has a good quantity of medical centers in the shape of government and private hospitals where the treatments are provided for all kinds of medical problems. The patients are being satisfied at these hospitals via the professional care of experienced doctors and their staff. Some of the hospitals in Chatra are named as:

The people of Chatra largely depend on the agriculture and forest materials for their livelihood. The major crop of this place is paddy but other crops like Maize, Niger, Mustard and Millets are also quite favorable. However, the inhabitants primarily depend upon the rainfall for the cultivation of these crops. Apart from that, some people are also depended upon the forest products like blackberry, jack fruit, kendu leaves, lah, chironjii and mahuwa. Therefore, the major source of Chatra’s economy is agriculture and forest products.

Chatra city of Indian state of Jharkhand has plenty of utility services offered to its inhabitants. It has a post office in its area where all the postal services are provided to seekers. Besides the head office, there are multiple post office branches are located at the varied locations of the city. Moreover, the people of Chatra also enjoy banking services offered at the branches of top banks of the country such as Bank of India, State Bank of India and Allahabad Bank. These banks have also located ATMs at the localities of Chatra city for instant banking transactions.

Spending crucial days of vacations at the lap of nature is always a memorable moment of our life. The amazing place of Chatra in Jharkhand state provides you exactly the same experience through its natural magnificence. This city is blessed with picturesque sightseeing attractions where the tourists forget their worries of life and enjoy their holidays with the near and dear ones. Chatra has a bunch of waterfalls in and around its boundary where making a visit is always a pleasurable experience for any traveler. These are Bichkiliya Waterfall, Maloodah Waterfall, Gua Waterfall, Keridah Waterfall and Balbal Duari Waterfall. The place of Tamasin is also a popular tourist attraction around Chatra city.  Read More........................

Chatra city consists of excellent accommodation arrangements for the travelers so that they can easily embark on to its worth to be visited tourist attractions. The hotels in Chatra illustrate great Indian hospitality and provide the guests everything for their need.They have excellent in-room amenities offered at their comfortable rooms, which are beautifully complimented by the multi-cuisine restaurants and bars. Moreover, Chatra hotels are comprised of state-of-the-art amenities within their sprawling premises. Some of the hotels in and around Chatra are:

Adorned with mesmerizing natural beauty, Chatra city constitutes a major part in Chatra district of Jharkhand state. It has gained significance with its historical background that goes back towards the British rule and recognized with a great social reformer, Raja Ram Mohan Roy. Furthermore, the area is beautifully surrounded by mountains, valleys, plateaus and also with green forest and stones. Thus, it constantly witnesses a large number of visitors every year who come here to explore its natural beauty. Being an important city, Chatra fulfills all the basic amenities of its inhabitants such as banking with many bank branches, postal services at post office, infrastructure, transportation with both road ways as well as railway and accommodation at the hotels for the travel vacationers. Besides that, taking part in the celebrations of various local festivals and fairs of Chatra is also a unique experience for anyone because they are solemnized with lots of enjoyment and enthusiasm.

Comments / Discussion Board - About Chatra